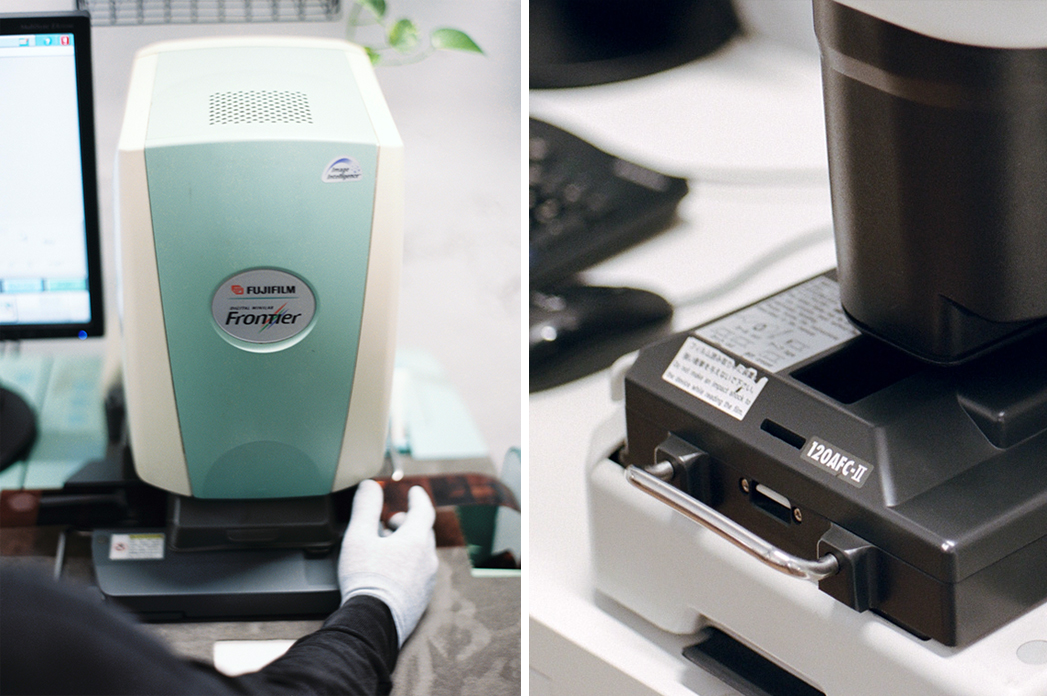 One of the most commonly asked questions we get at our lab is: what is the difference between the Noritsu scanner and the Frontier scanner? Which one is better? Which one is right for me?

In order to properly answer this often asked question, we thought we would dedicate a blog post to it. Because as you’ll discover, the two scanners are not entirely the same and offer slightly different and subtle benefits; consequently the end results will vary. This is important to understand because the scanner you select for your film scans will depend on the end result you are looking to achieve.

Here at Carmencita Film Lab, we use both the Noritsu HS-1800 scanner and the Fuji Frontier SP3000 scanner to digitize your film work. Both of these scanners can achieve amazing results, but the decision as to which one to use on your film scans will largely depend on your personal preference.

To illustrate some of the differences between the two scanners, we have some side-by-side comparison shots.

All the images we kindly provided by Jan Scholz (Micmojo) shot during a trip to the Canary Islands. If don’t know his portrait work, we highly recommend taking a deep dive into his online portfolio! 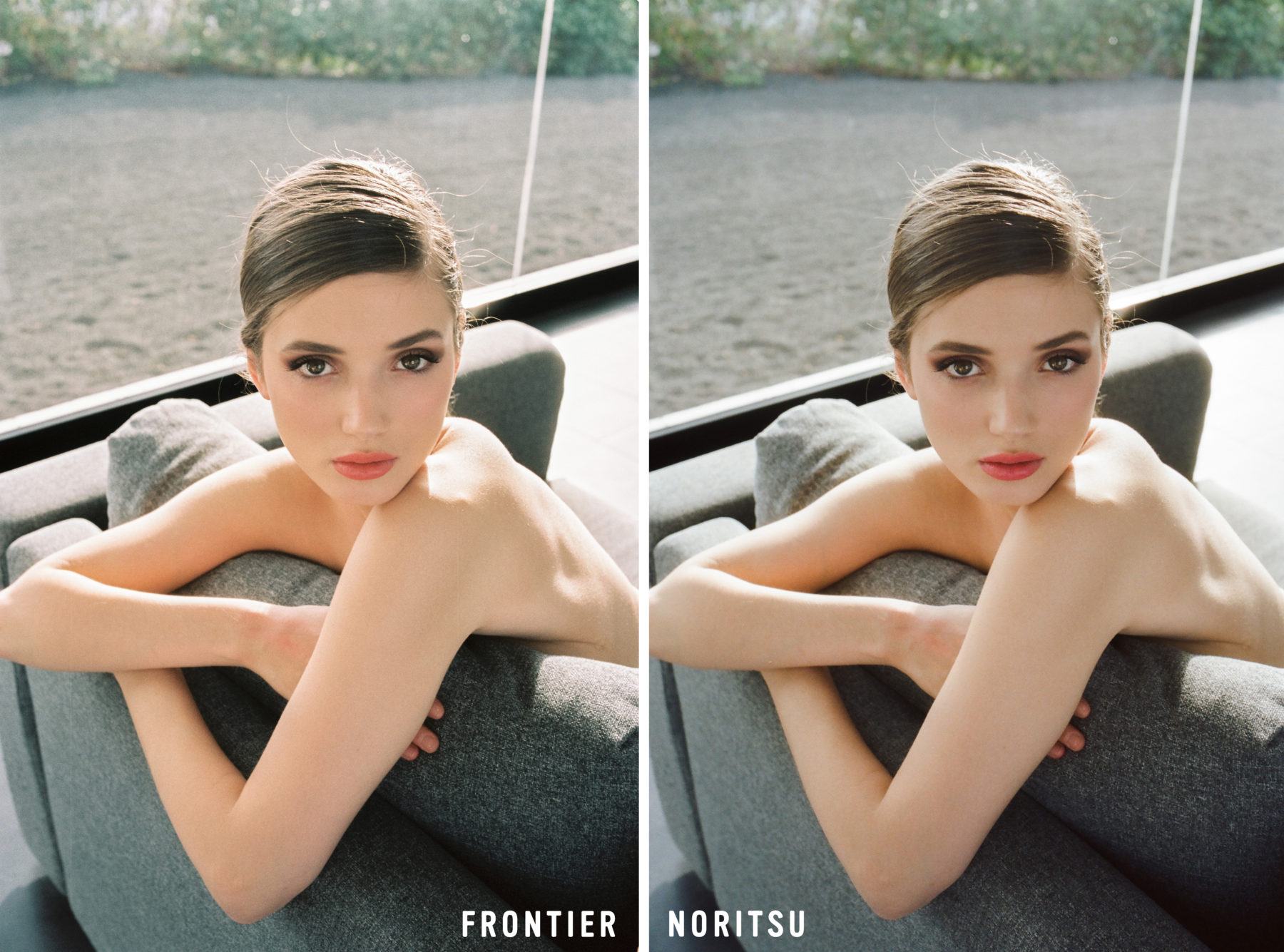 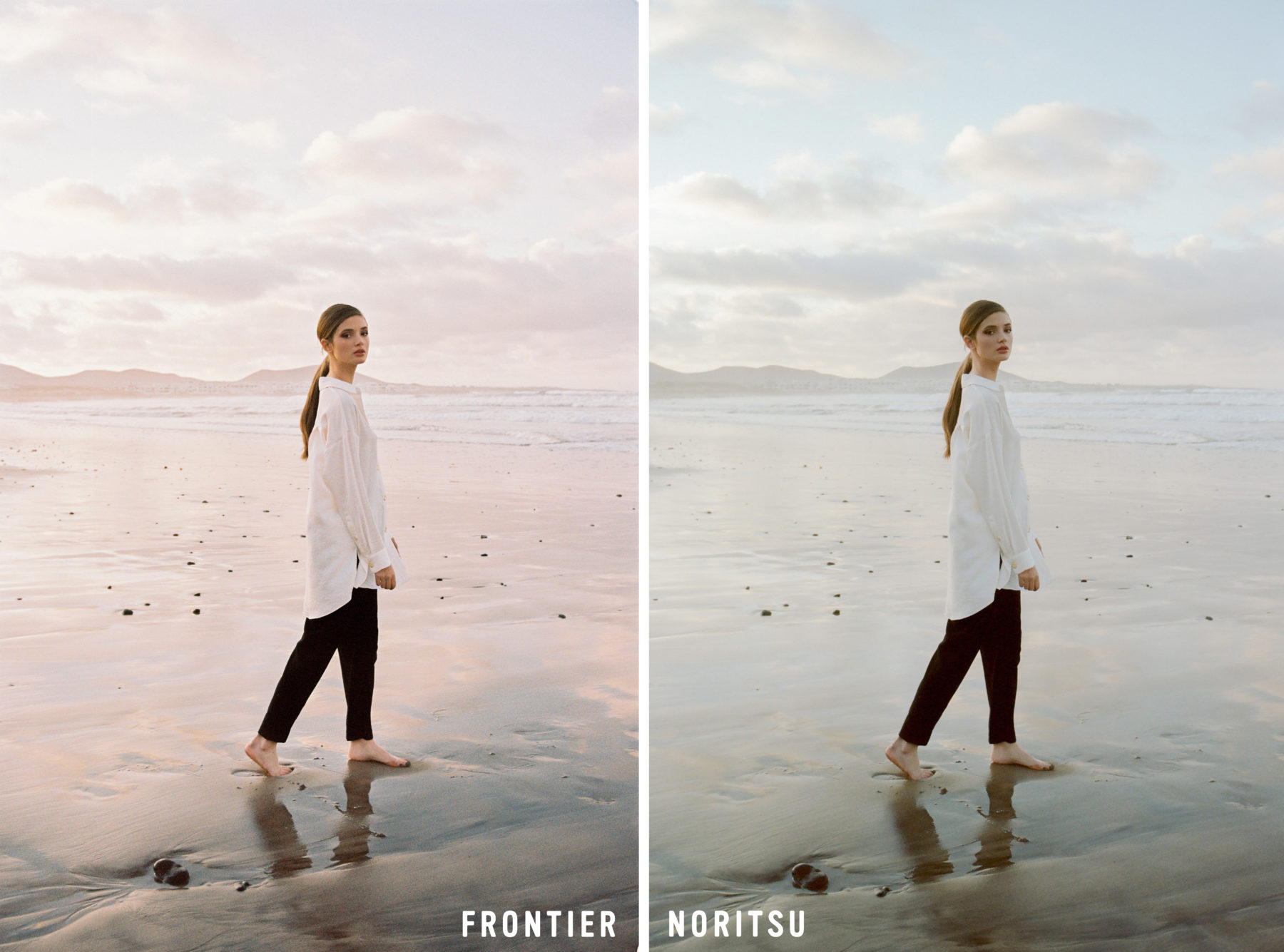 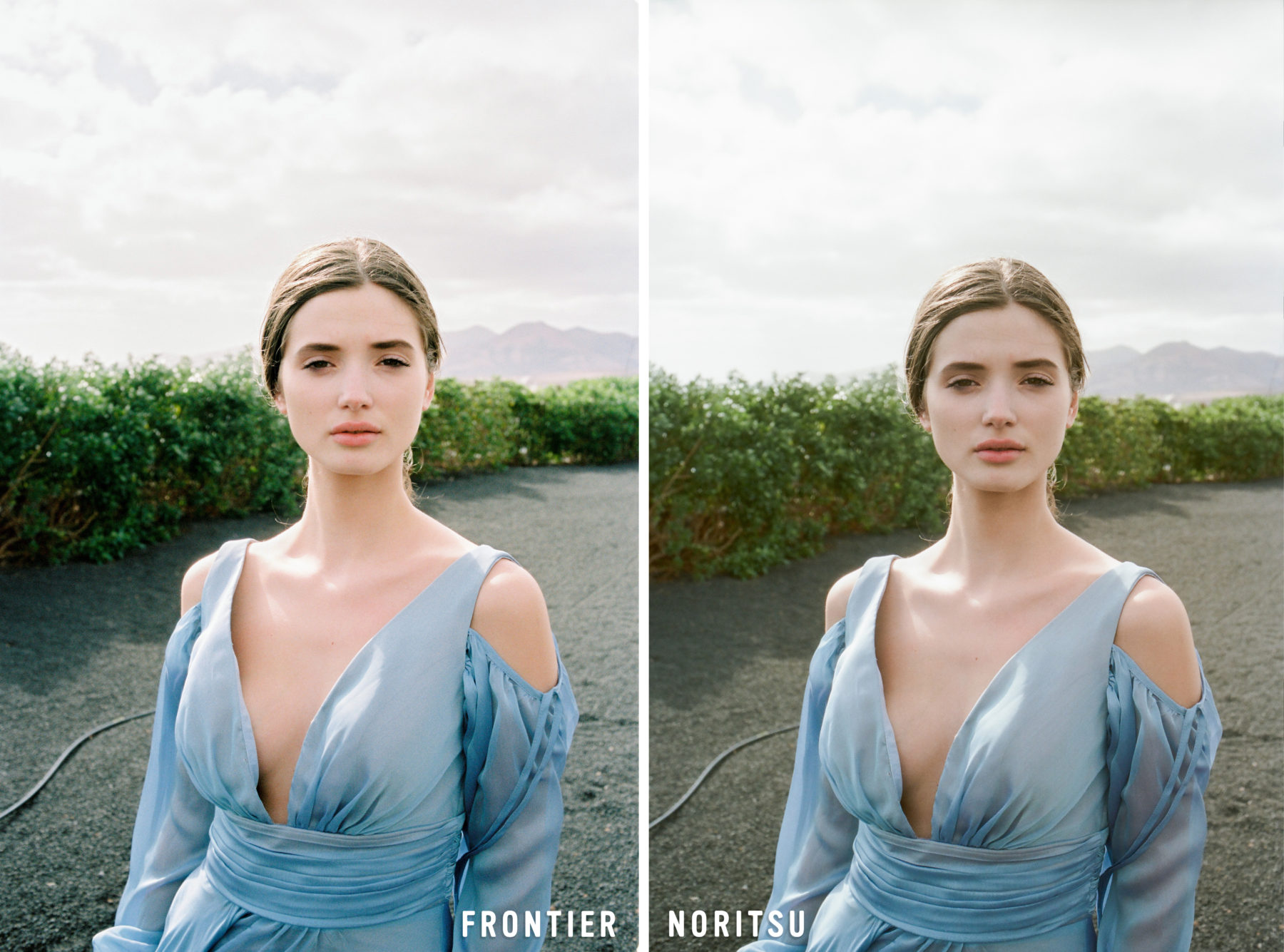 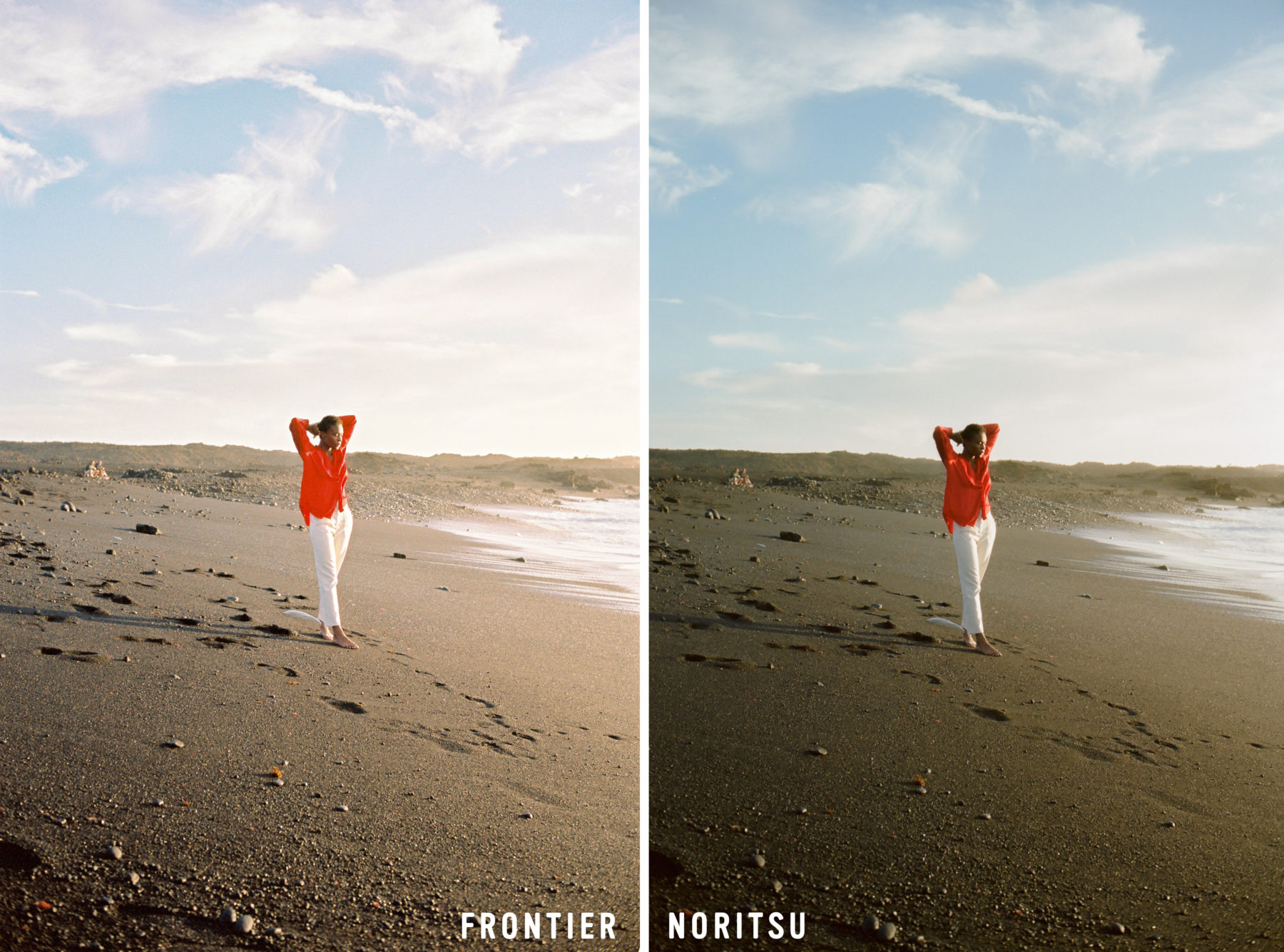 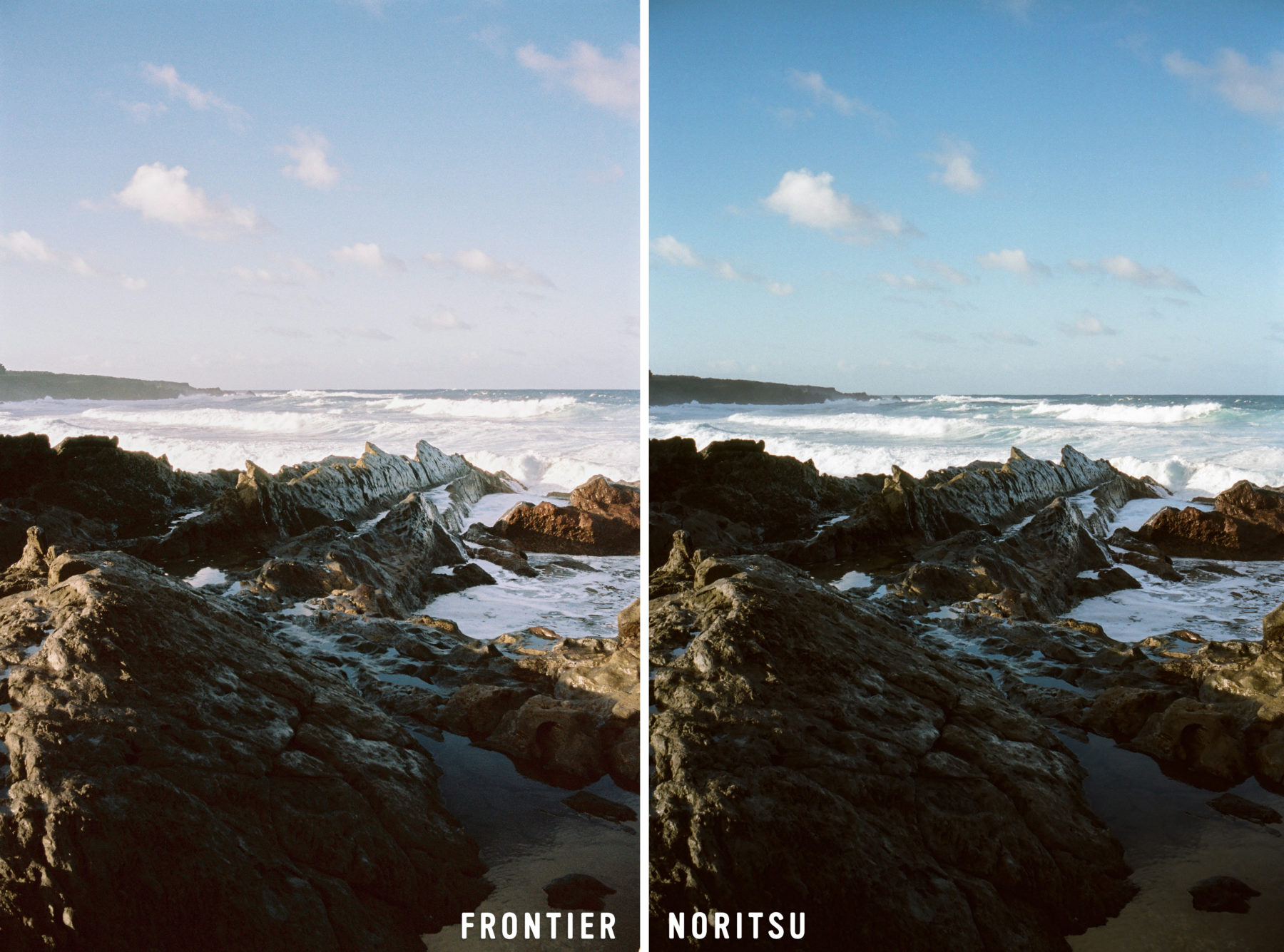 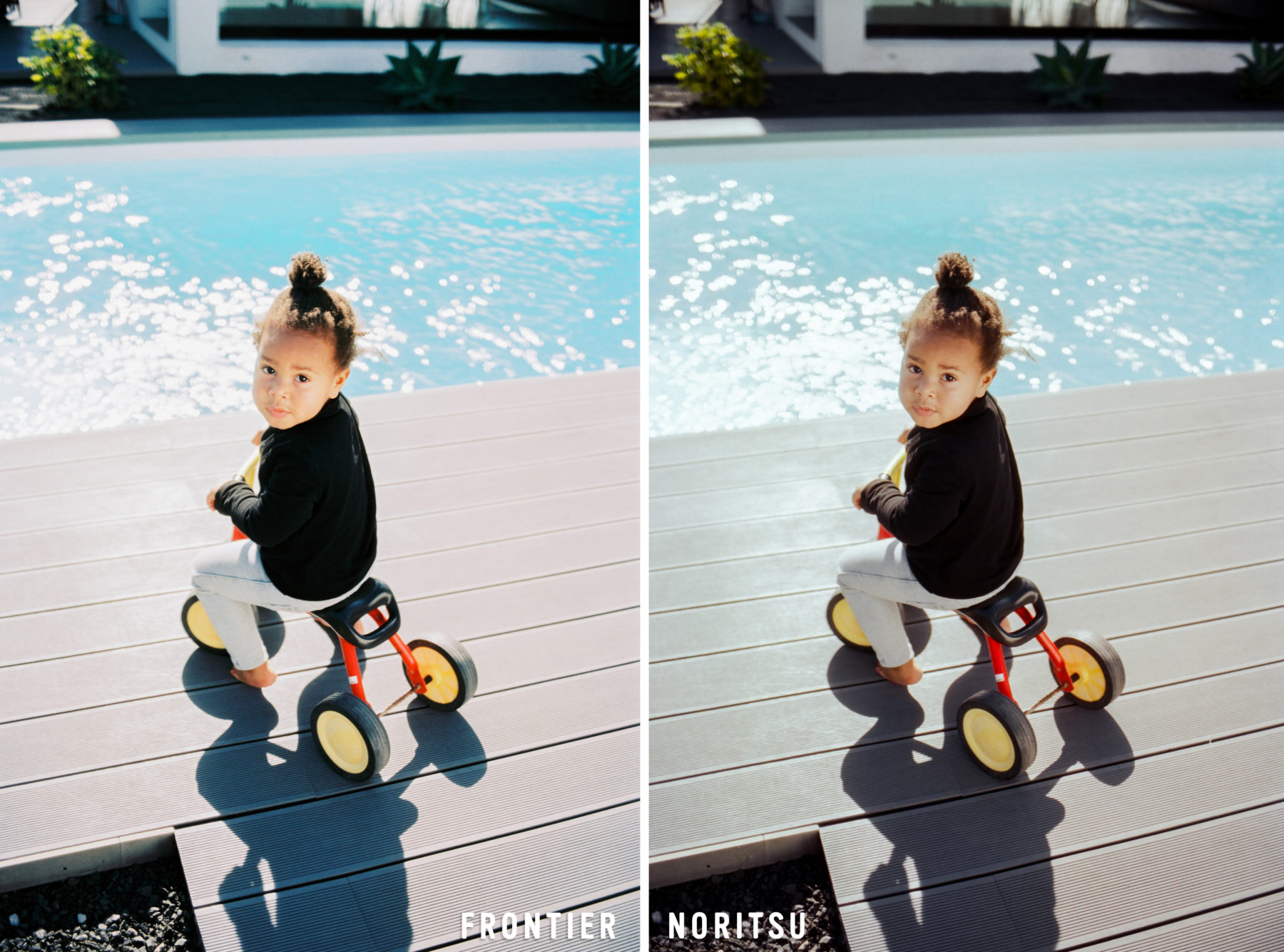 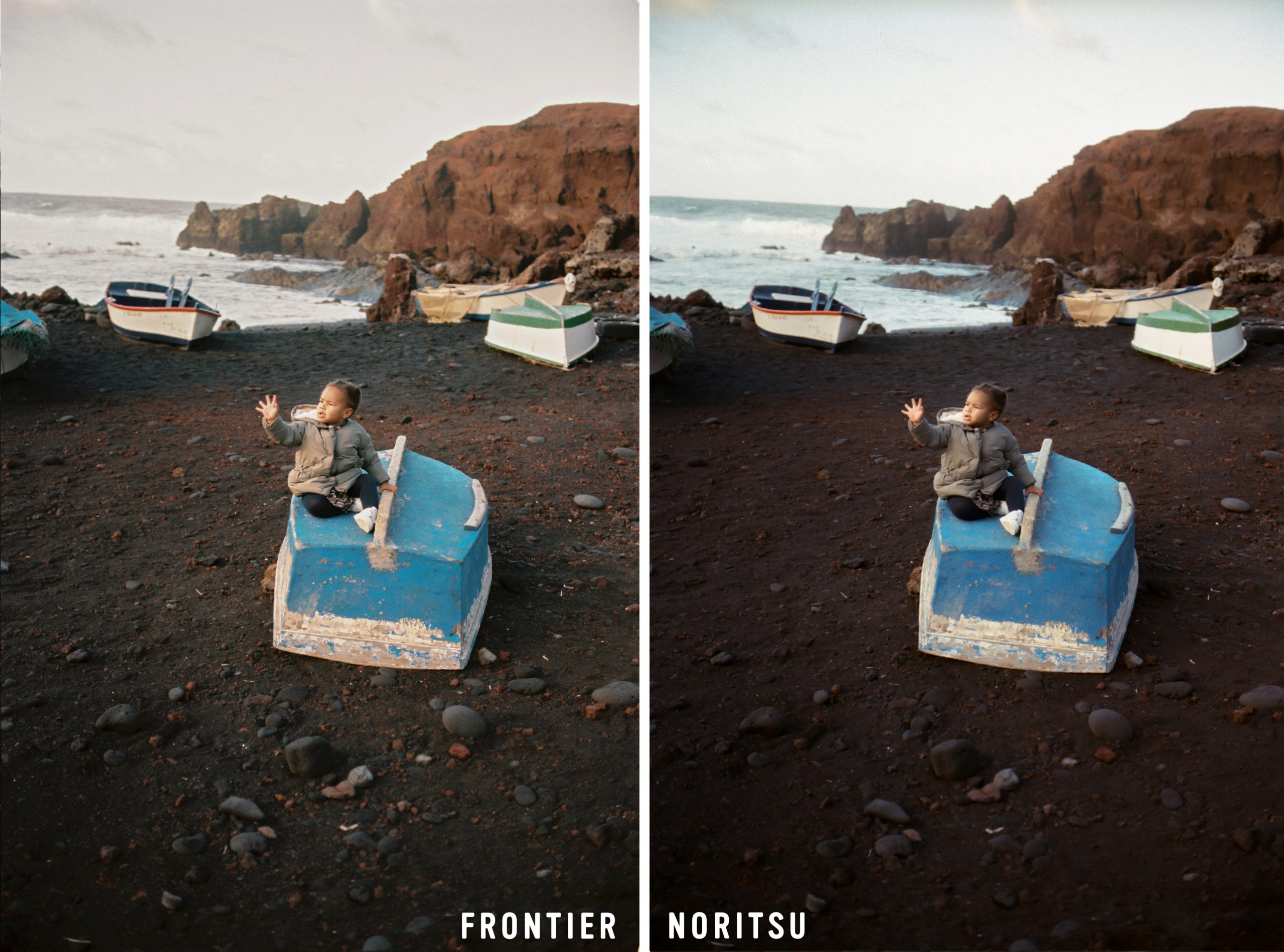 Comparisons are awful, we all know it (and that’s why we love them), so take this with a grain of salt and do not overthink it, because at the end film is to be enjoyed out in the field and not burning your eyelashes behind a screen.

If you go back and forth between the images you will see how the color spectrum changes dramatically.

On one hand, the Frontier is always more colorful, with a feeling of “clarity”, colored shadows and local contrast that makes the image stand out, the colors dance and your eyes spark. It’s a Hollywood blockbuster with Dolby surround.

On the other hand, we think about the Noritsu as that independent french movie from the late 60’s, with long silences and subtle changes in long uncut shots. It shows you a less processed version of the emulsion, a more flat and raw; less eye-candy image. You might not be convinced at first but it wants you to dive a bit deeper into it and let it sit for a while. Tonal transitions are everywhere and the colors are blended together creating a consistent image that your eye wants to explore.

It would be terrible, unfair, completely biased and probably politically incorrect to frame or reduce the complexity of each scanner to one word but well, we will do it.

Frontier will make your life happier

That’s it, we said it, you can now cancel us, retweet about it and have the CEO’s of both companies call us to court

Of course what we just said is an absolutely bold and simple definition for both, it’s never black or white (unless you are shooting Kodak Technical Pan 25), there are are way to make the Frontier look soft and the Noritsu go punchy and vivid, but in general it’s not the way these scanners have been designed.

We did a first article a few years back of New Scan Option with the Noritsu HS-1800 comparing the 2 scanners but with no extensive knowledge about the Nortisu, we thought the Noritsu had to look like the Frontier and we worked towards that direction, but that’s like pretending your cat to behave like your dog. That’s why, after 5 years of experience with it we decided it was time to make a new update, explaining the complexity and possibilities of both scanners 🙂

Deciding on which scanner is best for your film scans is entirely up to you. If you are uncertain of which scanner you prefer, we encourage you to have a roll scanned on both the Frontier and the Noritsu to see which result suits your preference best. 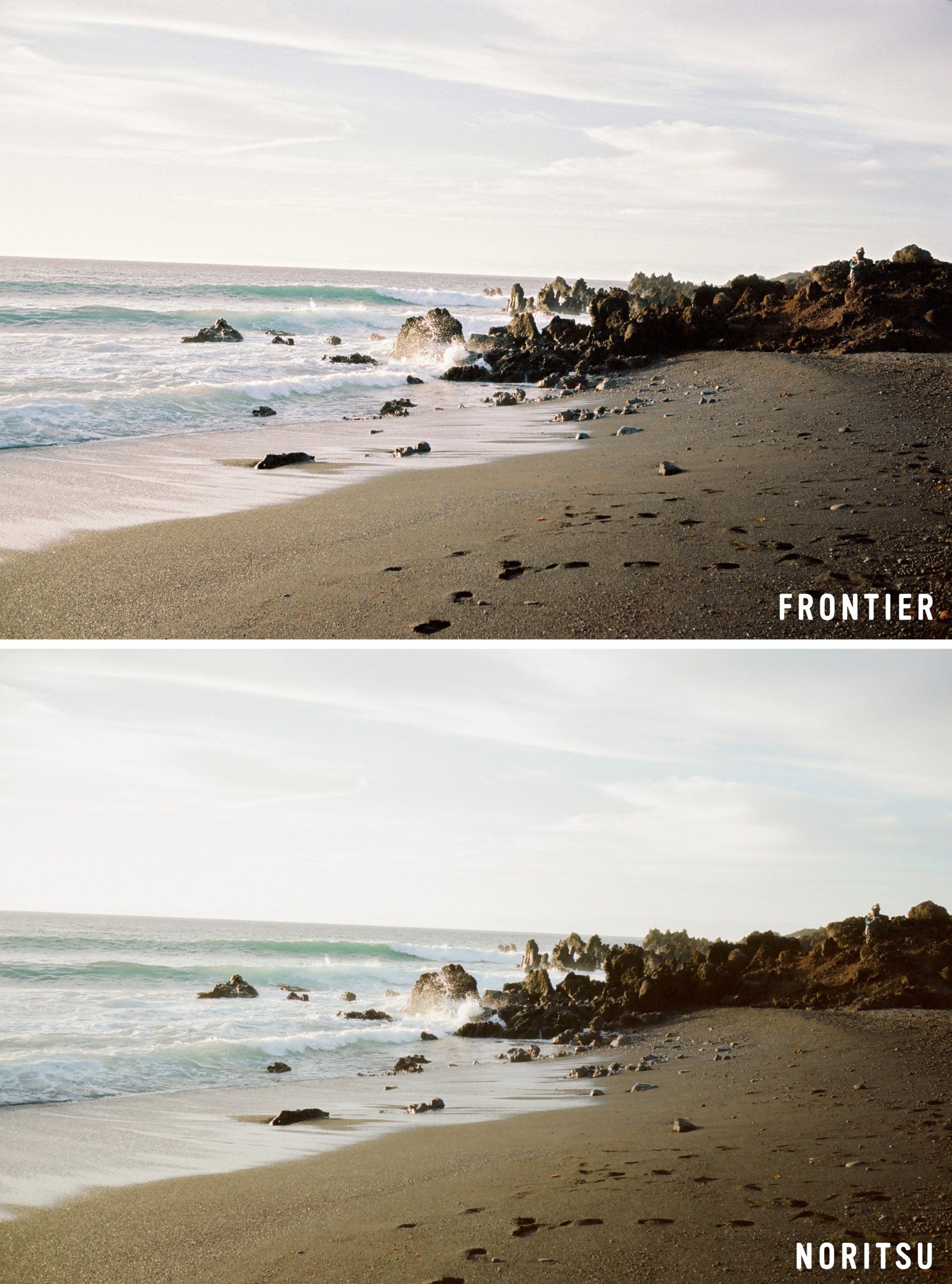 The Frontier scanner tends to be more frequently used for wedding and portrait work. The Frontier produces the types of colors and tones that most people who shoot color film are looking for. The overall tone tends to be more neutral, but the colors are punchy and vibrant. Frontier-scanned images tend to look like colorful dreams and consequently, images from the Frontier tend to be described as “ethereal and dreamy” for this very reason. The contrast is also rich, deep, vibrant, and even energetic. Blacks have a living inky quality to them that can’t be described as “just black”; the blacks are more than just blacks.

The overall image output from the Frontier is a characteristic color palette that you would expect from Fuji: clean, bold, bright, with sparkling colors.

At Carmencita, all our black and white scans are run through the Noritsu scanner. The Noritsu allows us to get a more neutral image tonality to begin with. In difficult scenes where the details in the shadows need to be lifted or contrast overall to be reduced, we find that the Noritsu produces much nicer results. The Noritsu also offers much more control for shadows, highlights, auto contrast, and sharpening. The Frontier scanner was really designed to scan color negative, not black and white film or slide film due to its natural contrast curves. If your lab does scan black and white film on a Frontier, watch out for those deep shadows; you might be able to spot detail on the negative that is not present on the scan!

We will recommend Noritsu, every time. The Frontier can be capable of achieving acceptable results with slide film, but it takes significantly more work to get there and the scene must be well lit and well exposed, to begin with. The light sources between the Frontier and the Noritsu are different in intensity, however, the Noritsu manages to produce more accurate end results, more efficiently and quickly. Also, with the Noritsu, you will be able to appreciate the differences in the fine grain of slide film that would be lost with the grain reduction algorithms of the Frontier.

Overall, Noritsu scans will always produce better large prints than the Frontier. Here, size does matter, and the ability for the Noritsu to output 5000 by 7500 pixels for a 6×9 medium format image makes the difference.

That being said, don’t be disheartened by the resolution differences between these two scanners. Resolution, while important, is not everything, and there are many elements that contribute to whether or not your image will look good printed. We suggest reaching out to us if you need some large printing done. We are happy to help in this area! For most sizes below 50cm wide on the short edge, both scanners perform equally well. But when you want to go bigger, even though the current scaling algorithms from Photoshop do an amazing job, extra, extra-large size scanning in TIFF is something you might want to consider. 😉 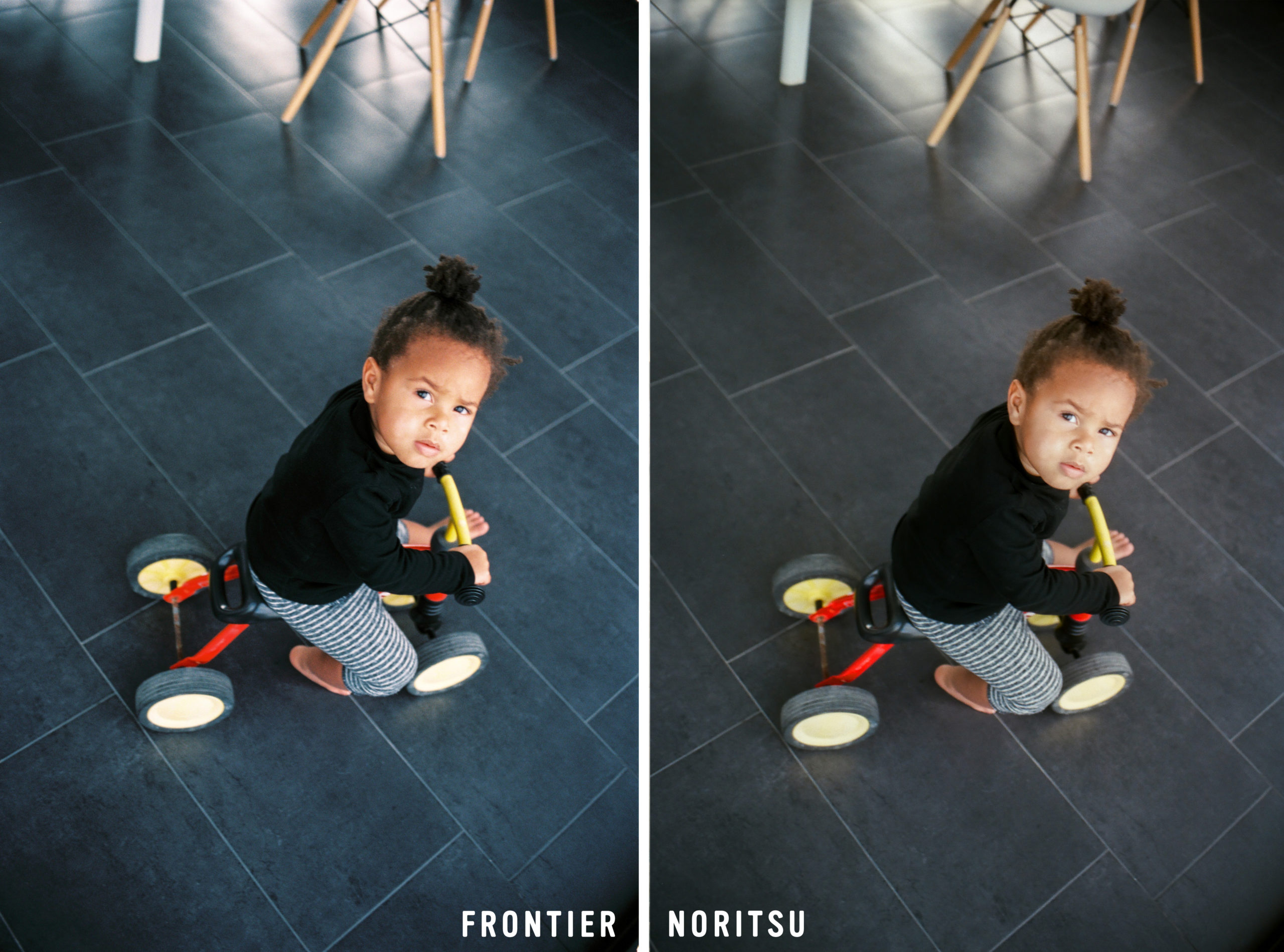 With slight differences, both the Noritsu HS-1800 and the Fuji Frontier SP3000 produce great images. However, the view on which one is the best is up to you! Each scanner offers subtle and different interpretations of your film. Remember, there is no “real look of the film”; each image is produced through interpretations and only you can decide which suits your style and photography techniques best.

Have a question about scanners? Drop us a line at ask@carmencitafilmlab.com! Even if we haven’t developed or scanned your roll in our lab, we’ll help you out and answer your question.

We are here to help 🙂

NERDY BONUS: The Frontier incorporated a technology on its last model (SP-3000) called HyperTone. This was a game-changer since it introduced heavy software tone-mapping technology that enabled it to expand its dynamic range and make it virtually impossible to burn highlights. That technology sounds familiar? Well, it was the technology that enabled HDR in the late 2000’s and (yes, your iPhone uses the same technology too!). This as always has its ups and downs, but you can see that the Frontier typically “paints” the image much more than the Noritsu does.

The Noritsu can enable some tone-mapping on the luminosity channel to save some hard contrast situations but is not as heavy as in the Frontier. That is the main key difference for us that creates lovers and haters of the scanner at par. Pay attention to both images and go back and forth, you will start to see the rabbit in the hat 😉

Technical Side by Side Scanner Comparison

Wordsmith for Carmencita and coffee connoisseur.
I like experimenting with film, reading about film, learning about film, talking about film, and writing about film.
My idea of fun is spending an afternoon making double exposures. I believe in kindness; throw that stuff around like confetti. 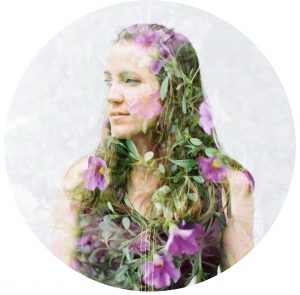 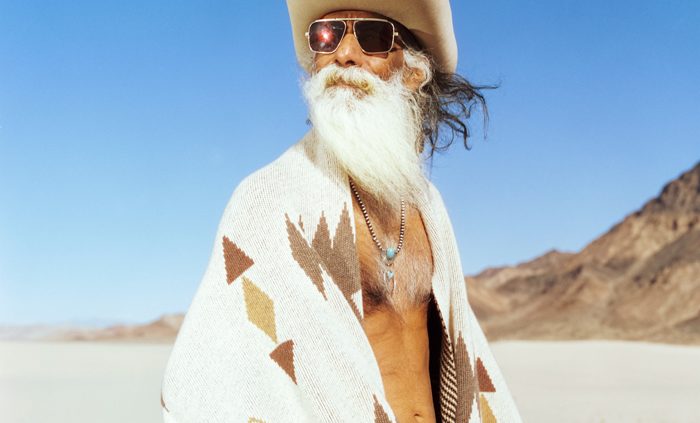 July 6, 2021/in Clients /by carmencita
END_OF_DOCUMENT_TOKEN_TO_BE_REPLACED
https://carmencitafilmlab.com/wp-content/uploads/MamiyaRz67proII-Cinestill50D-CarmencitaFilmLab-AndreaCalvetti.jpg 877 700 carmencita https://carmencitafilmlab.com/wp-content/uploads/Logo-Carmencita.png carmencita2021-07-06 13:29:282022-06-13 18:50:05BEST OF DECEMBER 2020
Let’s celebrate our 2nd Anniversary! 5% off on all the CAMERAS with the code 2NDANNIVERSARY5Get yours!
Manage Cookie Consent
To provide the best experiences, we use technologies like cookies to store and/or access device information. Consenting to these technologies will allow us to process data such as browsing behavior or unique IDs on this site. Not consenting or withdrawing consent, may adversely affect certain features and functions.
Manage options Manage services Manage vendors Read more about these purposes
View preferences
{title} {title} {title}
Scroll to top